Our carefree days of summer are coming to a close. Rob and I attend preschool orientation tomorrow and Dorothy begins next Tuesday. Today the girl spent all day with my husband’s parents swimming in their neighborhood pool, which will close after this weekend. She told me emphatically she was not planning on doing flips in the water today because she has a runny nose. Somehow I doubt she maintained her position on that issue. I spent most of the day in the kitchen getting ready for our new routine. I made some chicken tortilla soup for the freezer, for heat-and-eat lunches at the weather gets cooler. I love soup for lunch in the fall, but I have never found any canned soup worth eating that doesn’t have tons of sodium, MSG, or both. (If you know of one, leave me a comment!) So homemade soup in freezer jars it is. 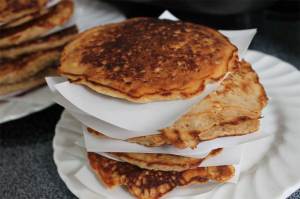 Then I spent some time sprucing up Dorothy’s room, since though she won’t take it with her, it seemed like a nice thing to give her a pleasant and orderly jumping-off-spot. I laundered, pressed and rehung her curtains, washed her bed quilt, and tidied up her space a bit. Then I made a double batch of oatmeal pancakes for the freezer so I can feed her breakfast quickly without resorting to packaged food. I put freezer paper slips between them so they won’t become one solid pancake brick in the freezer–it will be easy to grab just one or two.

I’ve prepped a Moroccan-style stew for tonight, with bread from the bread machine on the side, and I when I went to pre-cook my chickpeas I realized, ugh, that my pressure cooker was among the things I had to pack away when we put stuff in storage a couple weeks ago. Bummer. Fortunately I had canned chickpeas in the pantry, since you never know when you’ll need an emergency batch of hummus, but it’s rather frustrating. We did have a showing last weekend, but the prospective buyers claimed disappointment regarding our lack of a garage. And I have to say this is a bit confusing to me, since it states very clearly in our listing that the house has no garage. Maybe they thought we didn’t mean it?