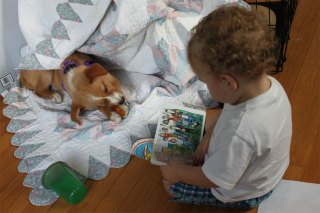 Well, we’ve had some puppy-related drama since my last post. Poor pup got  pathetically sick and I took her in for care on Sunday morning. She was admitted to the animal hospital for IV fluids and medication, where she stayed for two days. She’s recovering nicely and seems fine now, but our finances might not be. Let’s just say I could have purchased several new sewing machines for the amount we’ve now spent on this Humane Society animal. I hope she gets how lucky she is.

Other than the vet bill, however, we’re enjoying this furry little addition to our family. I’ve made some observations about how much she has in common with Worth:

The top ten things my toddler and puppy have in common

10. They can climb stairs but have trouble with the descent
9. They would like to play in the toilet
8. Neither is house-trained, in spite of toilet fascination
7. They make the cat roll his eyes
6. They stay at my heels constantly
5. They put everything in their mouths
4. They are both just the right size for the new kennel (hmmmm…)
3. They both bite (a little)
2. They respond only to simple commands
1. They whine when they don’t get their way 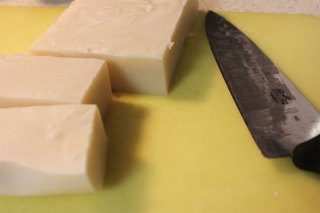 I have plans for some crafting (hello dog bed!) but haven’t gotten much done. I did find enough time last week before the puppy health problems started to make soap. I use the cold process method to make lye soap, instructions for which can be found online. I made one unscented batch for my brother and another for myself, half with a “clean linen” scent and the other half with coconut scent. It’s so satisfying to see the newly-cut bars sitting out to cure–such a nice feeling of actually having accomplished something in spite of vet visits and one grumpy, teething toddler