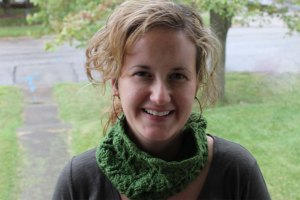 This cowl is for Nana but I didn’t think I’d get her to pose for a blog photo. It’ll look sweet with her green eyes. This is the first pattern I’ve finished from the awesome book Crochet So Fine by Kristin Omdahl. I love the patterns in this book because they are all beautiful items that look crocheted. Sometimes crochet patterns look like they are trying to be knit patterns, which just doesn’t work. These lovely, lacey items show off the best of what crochet can do, in my humble opinion. Rob did have to laugh at me a bit for making a neckwarmer because it is the kind of thing that is only worn by people who knit or crochet. You don’t often go to the mall and see a display of neckwarmers. Maybe some day they’ll catch on–it is nice to have a warm neck, no? In the meantime, I hope Nana likes it.

This is my Very Expensive Fairy. We had a bit of an adventure regarding this year’s Halloween costume for Dorothy. I don’t make the kids’ costumes. Store-bought costumes have been, up to this point, cute and affordable, and I don’t like to toil over a project that will only get worn once. I’m all about seeing my kids in their homemades on a regular basis. My favorite Halloween tactic has been to purchase once-used Old Navy costumes on eBay for a just a couple dollars. The Old Navy big-belly costumes are cute and warm and comfortable for the trick-or-treater. Dorothy sized out of them this year, however, and declared that only a “pretty” costume would do. No more fuzzy purple dragons around here. I showed Dorothy some very cool costume ideas from the Family Fun magazine, which I love. She vetoed them all. I pulled up a Halloween website and let her browse the selection to get ideas. What I hadn’t realized yet is that costumes marketed for 5-year-old girls would look more appropriate on a Bourbon Street call girl than on my kindergartner. After lengthy searching and the input of her (older) neighbor girl, Dorothy announced that she found the costume she wanted. I looked. It was a $48 Barbie costume with a slutty vibe and wings.  Wow.  I told her (switching plans on the fly!) that we weren’t actually going to buy online, but I’d take her shopping to buy her costume in person. I remembered seeing some very cute costumes at the Gymboree outlet on my recent shopping trip. Rob needed something from the mall anyway. I figured that once we were there in person she’d fall in love with an age-appropriate “pretty” costume and the whole thing would end happily. When we went into Gymboree, 36 days before Halloween, the costume selection was already very picked over. The peacock costume I’d admired at the outlet mall was only available at this point without the tail (what’s the point?) and many of the costumes were only left in one or two sizes. There was, however, this adorable fairy princess costume. It fit the bill for her–pink, fluffy, “pretty,” and it involved wings like the neighbor’s costume. It fit my bill (so I thought) because there were matching warm tights available, it seemed to be of good quality, and it didn’t make her look like a 5-year-old floozy. I thought we’d really found the solution until the saleslady asked me for $69.91. What?! I’d not even looked at the price, never dreaming we’d be paying so much for tiny bit of tulle and some plastic accessories.  Yikes. But as memories of the Budding Buxom Barbie costume flitted through my mind I paid it. Dorothy never even saw me flinch. And it’s cute. Adorable, even. She’s as sweet as can be in it.