Today’s post is about birthdays and half-birthdays too. In our family we celebrate six-month birthdays with cupcakes, as was the tradition in my family growing up.  For Worth’s half-birthday we made Pinterest-inspired monkey cupcakes with chocolate frosting, vanilla wafers, white chocolate chips, and piped dark-brown frosting. My kids had a great time decorating these, and they were simple enough that the 4-and-a-half-year-old boy of honor could fully participate. 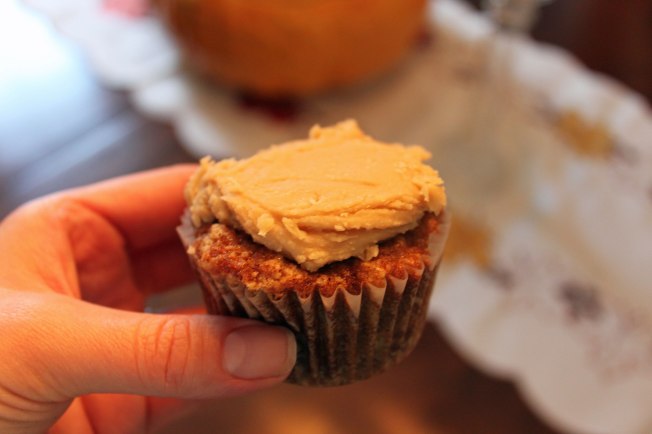 Dorothy wanted un-decorated cupcakes that we could upend over some clipart of the Wicked Witch’s feet (see my photo on Instagram) to make the cakes look like houses that fell on the witch. Fun! We’d just been on a field trip to an apple orchard, and I was still working my way through the huge bag of apples I bought, so I made apple cupcakes with caramel icing. The apple cake recipe I used calls for shredded apple, so there is a nice apple flavor without the chunks that end up mealy or tough in some apple cake recipes. I substituted pie spice for the cinnamon, and the moist consistency of the cake made perfect cupcakes that don’t fall apart when you eat them and peel away from the paper easily. Go and make these cupcakes this afternoon–seriously, they are so good. And the cakes would have made a perfectly nice dessert or snack without frosting, but of course for us they were meant to be cupcakes, so they really had to have frosting. I used this caramel frosting recipe and it was just right, Caramel frosting over apple cupcakes–yum.

Amid our half birthday celebrating at home, Worth got invited to the birthday party of some friends. The kids were having a space-themed party so I made them embroidered comet t-shirts. Some of my favorite free embroidery designs are the retired sets at Bunnycup Embroidery. I used a design from the Stars N Stripes set, but rotated it to look like a falling star or comet. I like to do embroidered shirts like these, where the embroidery is done on a fabric panel that is then fused and sewn to the shirt, rather than directly on the shirt. That way I don’t have to deal with embroidering on stretchy knit, and the itchy back of the designs is not up against the wearer’s chest. I think the children liked their shirts.