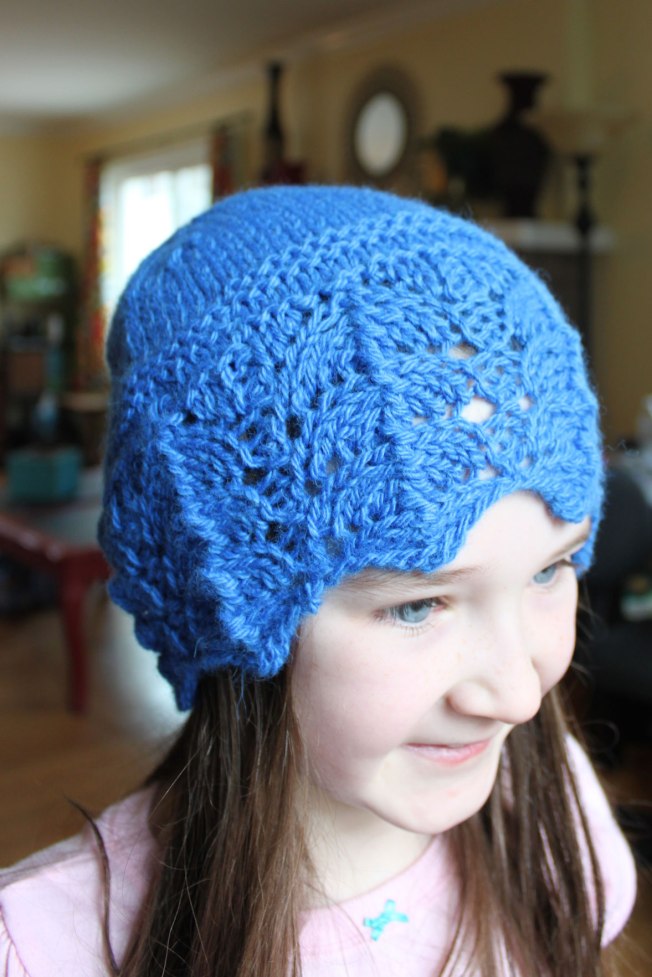 Dorothy got a new blue hat to start out this chilly January. It was really supposed to be my hat, but sometimes that happens. The yarn is a delicious, wonderful, hand-spun, hand-dyed wool from Block Island, Rhode Island. A friend sent it as a souvenir of her trip. I’ve held on to it for six months while I waited for the right inspiration to hit, and when I came across the edge of lace hat pattern in 101 Designer One-Skein Wonders I decided that would be it.  I got a new black coat for Christmas, and I thought the pop of bright blue was just what it needed. The first problem with my execution of this plan was that I only read the first line of the pattern, which says to do the eight lines of the lace pattern twice. And I followed the lace chart completely through–twice. The edge was pretty, but not a bit like the photo I’d been drawn to in the book. I looked more closely. I was supposed to have put a straight knitted row in between every row of the lace chart, and the chart itself represented two repeats of the pattern. Oops. So my lace is unique. That didn’t bother me so much given that what I ended up with was still pretty, but my blue-eyed Dorothy had been watching me knit this and thought it was so nice, and then when I tried it on the color wasn’t very good for me. It made my autumn colors and green eyes look sickly, which is never the look I’m going for. Then I popped it on my daughter’s head and it was gorgeous. The blue is just the right color for her eyes and porcelain skin. So there you go, a hat for Dorothy. I have some heathery purple yarn left over from some other projects and I think I may try the hat again in those colors for myself. And I’ll enjoy my handiwork in a place I can see it better, on the head of my oldest!